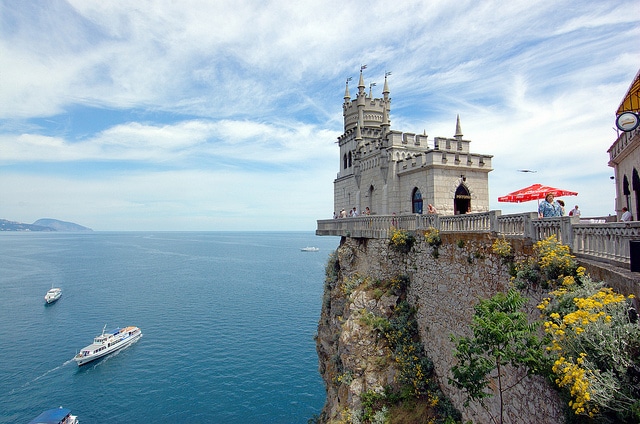 Castles reward travelers with the ability to travel back in time, marvel at the architectural grandeur, and even cringe at some of the unsavory practices such as torture and serfdom. While castles such as Neuschwanstein and Windsor are awesome and well worth the visit, oftentimes the real gems are lesser-known. If you’re sick of having tourists interrupt your make-believe sword fights and so over having random people photobomb your artsy shots, head to some of these alternative castles instead.

Known by its nickname “Chateau Clochard” (French for “homeless man”), the Chateau de Pont Remy Somme is an abandoned castle in Pont-Remy, France. Once a luxurious and beautiful castle where many well-known guests stayed including Mary Queen of Scots, King Henry II, Eleanor the Queen, and Henry IV, the Chateau has sadly become a forgotten palace (it was even difficult to find a picture of it!) Its troubled history includes being in between ownership for hundreds of years and battling several fires (including one recently in 2012), and the castle has tragically fallen into disrepair. It is unsafe to enter but visitors are free to explore its stunning exterior and grounds. 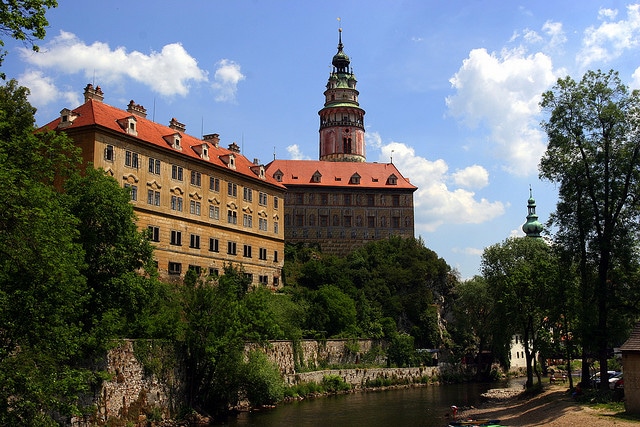 Located in southern Czech Republic, this medieval town is often referred to as “the pearl of Bohemia”. Although Cesky Krumlov was used as the film location for the thriller “Hostel”, this gem is anything but scary (but then again, who knows). The perfect alternative to waiting in line to see the Prague Castle, the Cesky Krumlov Castle sits on top of the charming town and has one of the largest castle grounds in central Europe. In addition to its beautiful architecture and fascinating history, this fortress also houses the Cesky Krumlov Baroque Theater, which is one of the world’s most completely preserved Baroque theatres, complete with its original theatre building, stage, machinery, stage curtains, and costumes. 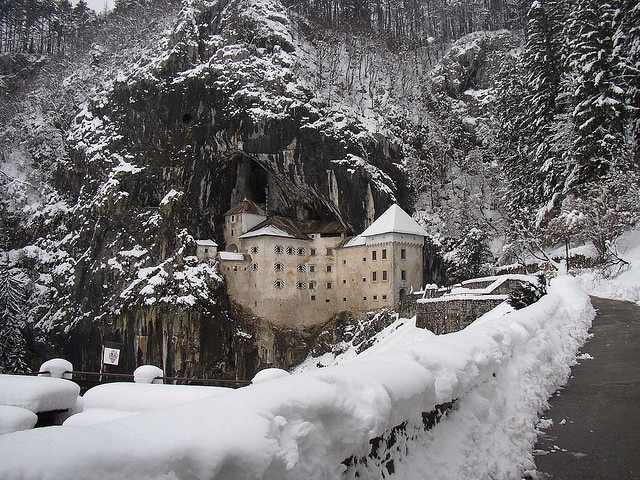 Predjama Castle is a 700-year-old fortress in Predjama, Slovenia that is built within a cave mouth of a natural rock formation near the Postojna Cave. The castle is usually only open on one side except from May-September, when visitors can explore the many secret passageways and tunnels snaking within. Predjama Castle has been rebuilt twice after experiencing war and natural disaster and is now a museum showcasing the life of various medieval lords. If you’re one of those people who enjoys parkouring on awesome rock formations in addition to getting in touch with your inner king or queen, Predjama Castle is definitely for you.

A decorative castle on the Crimean Peninsula, the Swallow’s Nest overlooks the Black Sea coast and is one of the most romantic-looking castles in the world. This small but stunning castle was built in 1911 by the German oil millionaire Baron von Steingel and inspired by German fairy tale castles. Since 1975, an Italian restaurant has operated within the castle, where visitors can feel like royalty and enjoy a delicious meal overlooking the ocean. 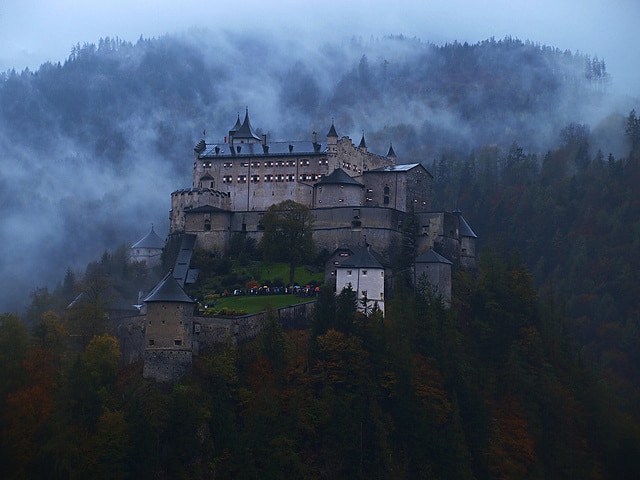 Sitting high above the tiny Austrian town of Werfen and surrounded by the Berchtesgaden Alps, Hohenwerfen Castle is one of the oldest and most breathtaking fortresses in Europe. Built around 1075, this castle is a short bus ride outside of Salzburg and visitors can either take a cable car up to reach the castle or a short hike. Hohenwerfen was at one point used as a state prison, so visitors can explore the more sinister part of its history as well as its top attractions, including an extensive weapon collection and an impressive falconry. Exterior shots of the castle were used as the French hotel in the movie Just Married as well as the 1968 film Where Eagles Dare, so visitors may recognize its stunning architecture and majestic position among the mountains. 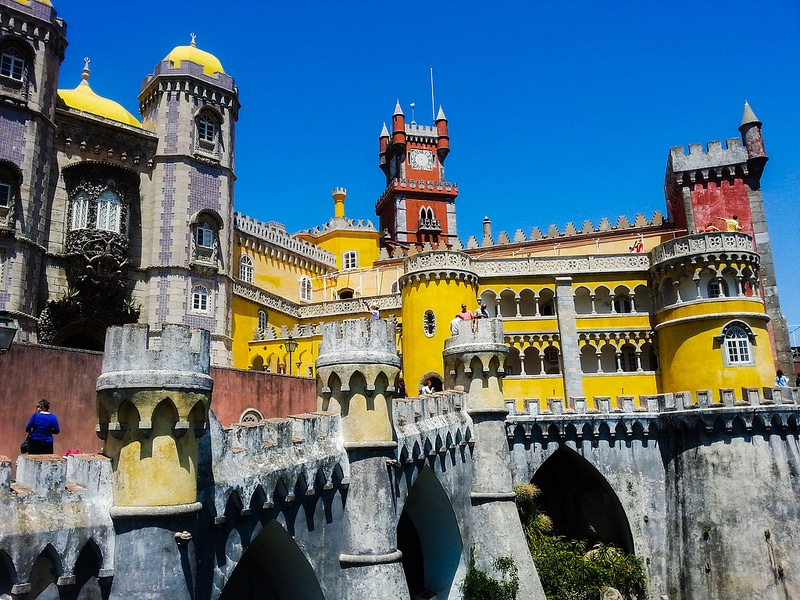 Built as a palace in the 15th century in Sintra, Portugal, Pena Palace was later reconstructed as a monastery. After an earthquake ruined the monastery, Prince Fernando acquired it in 1838 and rebuilt it as an elaborate palace. The oldest palace inspired by European Romanticism, it can be seen all the way from Lisbon and is beyond beautiful. Its style is an eclectic mix of the original design plus Romantic, Bavarian, and Moorish architecture, and it even houses an English garden where visitors can roam freely and enjoy a scenic picnic. 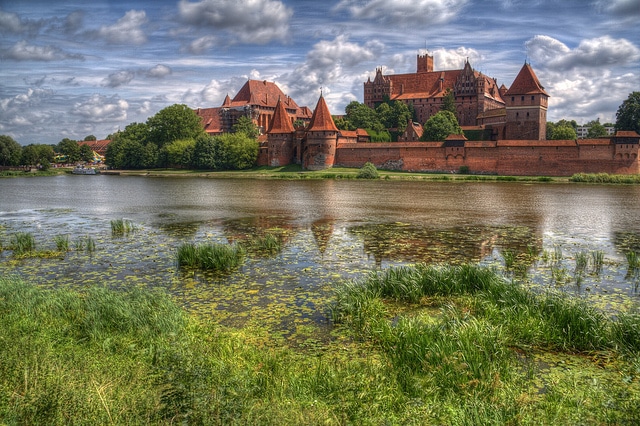 This often overlooked fortress is located in Malbork, Poland is the largest castle in the world by surface area and the largest brick building in Europe. Malbork Castle was built in 1406 by the Teutonic Knights, a German Roman Catholic religious order of crusaders. The Order named it Marienburg (or “Mary’s Castle”), and the town which grew around the castle was also named Marienburg. Since 1945 it has been part of Poland and known as Malbork. Today is it one of Poland’s national Historic Monuments and home to a large museum. Because it is so large, visitors can spend hours walking around the castle and its grounds. If you’re in the mood for something a bit spookier, be sure to take one of their night tours! 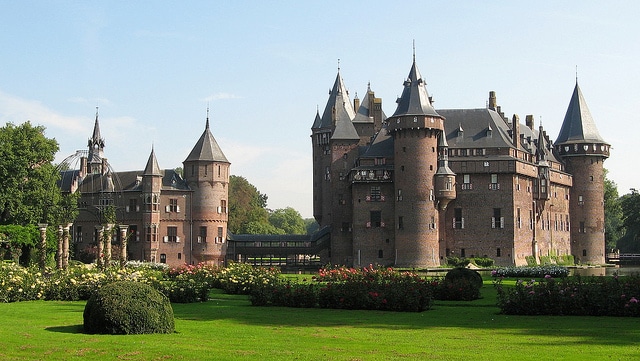 Located near Haarzuilens in the Netherlands, the Castle de Haar dates back to the 1390s. The originally castle was unfortunately burnt down in 1482 and rebuilt in the early 16th century. After changing ownership several times, the newly re-built castle fell into disrepair about 100 years later, and it wasn’t until the property was purchased by the Rothschild family in the 1890s that the castle was transformed into the beauty it is today. Several types of tours are offered to visitors, including one where they transform children into knights and princesses, so if you are one of those people who maybe looks a bit younger than you actually are, consider yourself lucky. The castle and its grounds are also regularly used for many different types of fairs and markets, with the most popular being the Elf Fantasy Fair. Don’t worry, we can’t contain our excitement either.

A medieval castle in Bojnice, Slovakia, Bojnice Castle is a 12th century Romantic fortress with many Gothic and Renaissance features, making it very unique design-wise. The first record of this beautiful castle is from 1113, and it was quickly passed from owner to owner for much of its history. The castle is known for its out-of-this-world events, with some of the most popular being the Castle Fairytale, the Summer Music Festival, and most importantly, the International Festival of Ghosts and Spirits. During the latter, they claim to “bring back to life” past owners of the castle, which to us sounds like the greatest thing ever. This fortress has also been a popular film location for fantasy and fairy tale movies, including the Italian fantasy series Fantaghiro.

Don’t get stuck waiting in long lines to see Versailles or the Alhambra when there are so many other unique castles and fortresses to explore. Visiting a less touristy castle will give you plenty of space to act out all of your favorite Disney moments and take some truly awesome pictures, so put on your prettiest dress or grab a plastic sword and have a blast exploring some of the most unique castles in the world!

TAGEurope
Previous PostHow to Answer “How Was Your Study Abroad Semester?” Next Post7 Festive Christmas Markets To Visit While in Europe