Home Destinations Europe 10 European Cities to Visit During the Winter 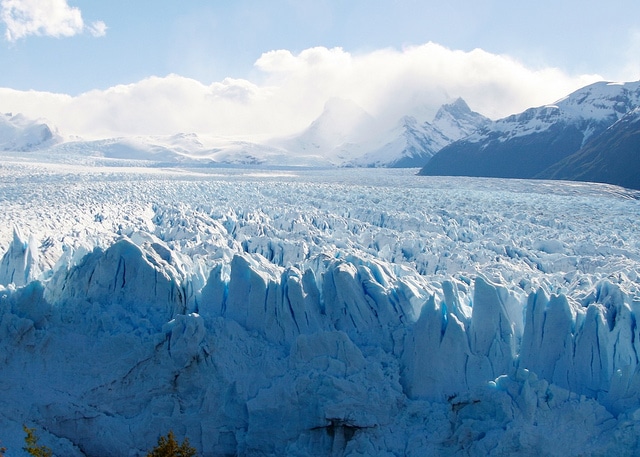 From sleigh rides through the Swiss countryside and skiing the breathtaking Alps to lounging in outdoor thermal pools and raging at ice festivals, there are some great European cities to visit during the winter. Whether you have just a weekend or a whole week, there are an unlimited amount of places to explore. To help you narrow it down, we’ve compiled a list of the top ten cities to visit in the winter. 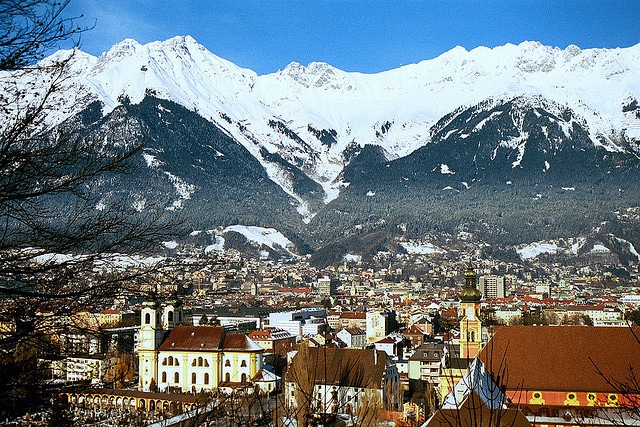 Innsbruck is known as the ski and snowboard capital of the world. As the two-time host of the Winter Olympics and covered in internationally recognized alpine resorts, Innsbruck does not disappoint. In addition to tearing up the slopes, visitors can tour the famous Olympic ski jump and other nearby athletic facilities.

Innsbruck was also a seat of power for centuries and history buffs will love visiting the royal Hapsburg home and soaking up the city’s beautiful architecture. As if you needed more of a reason to visit, Innsbruck is the home of Swarovski Crystals, and no visit to this city is complete without a tour of their bizarre but beautiful headquarters.

Pin this for later: 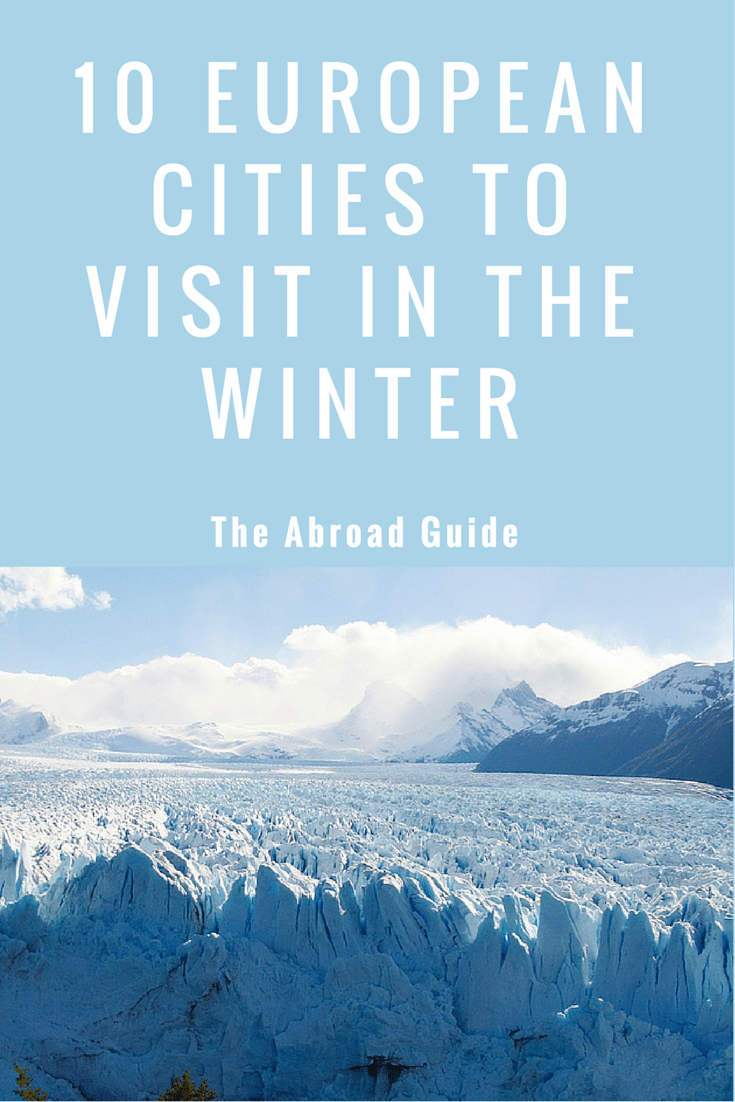 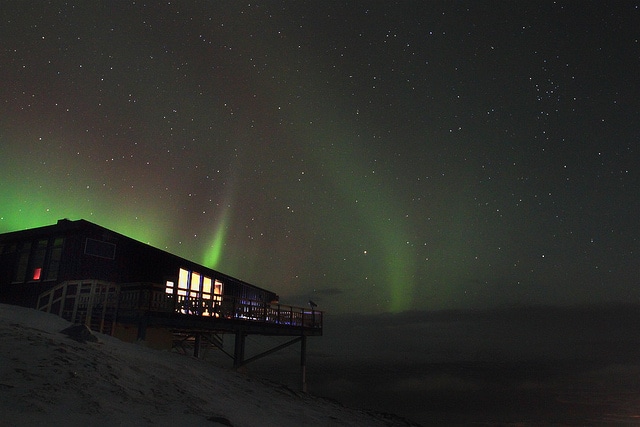 If you’re a die-hard winter fan and cold temperatures don’t bother you, Abisko is going to give you some serious bragging rights. Located just about as far north as you can get in Europe (unless you’re a reindeer), this Swedish town is known for its incredible views of the Northern Lights. BUT – this region is not for the faint-hearted, as the sun doesn’t rise for weeks during its coldest time. Not totally a bad thing…it means it will always feel like Saturday night!

Besides gazing at the aurora borealis, visitors can ski, hike, ice skate, go dog sledding, and explore the national parks. Don’t forget to check out the world’s first and most famous ice hotel, conveniently named Icehotel, in nearby Kiruna to really top your visit off.

It is no surprise that the home of Hans Christian Andersen ended up on this list, as Copenhagen is one of the most fairytale-like cities in Europe, especially in the winter. The Danish concept of “hygge” (or “coziness”) is at its peak in winter, when locals spend their afternoons and evenings relaxing, drinking hot chocolate, and enjoying their beautiful surroundings. The idea of coziness not just being accepted, but promoted, is enough to make Copenhagen one of the best European cities to visit during the winter.

Top sights in Copenhagen include Tivoli Amusement Park, Christiansborg Slot, and Rosenborg Castle, which are all even more charming covered in snow. Don’t miss out on Copenhagen’s winter culture month, Wondercool, which occurs in February and includes concerts in unusual venues, art shows, and culinary events. Yum! 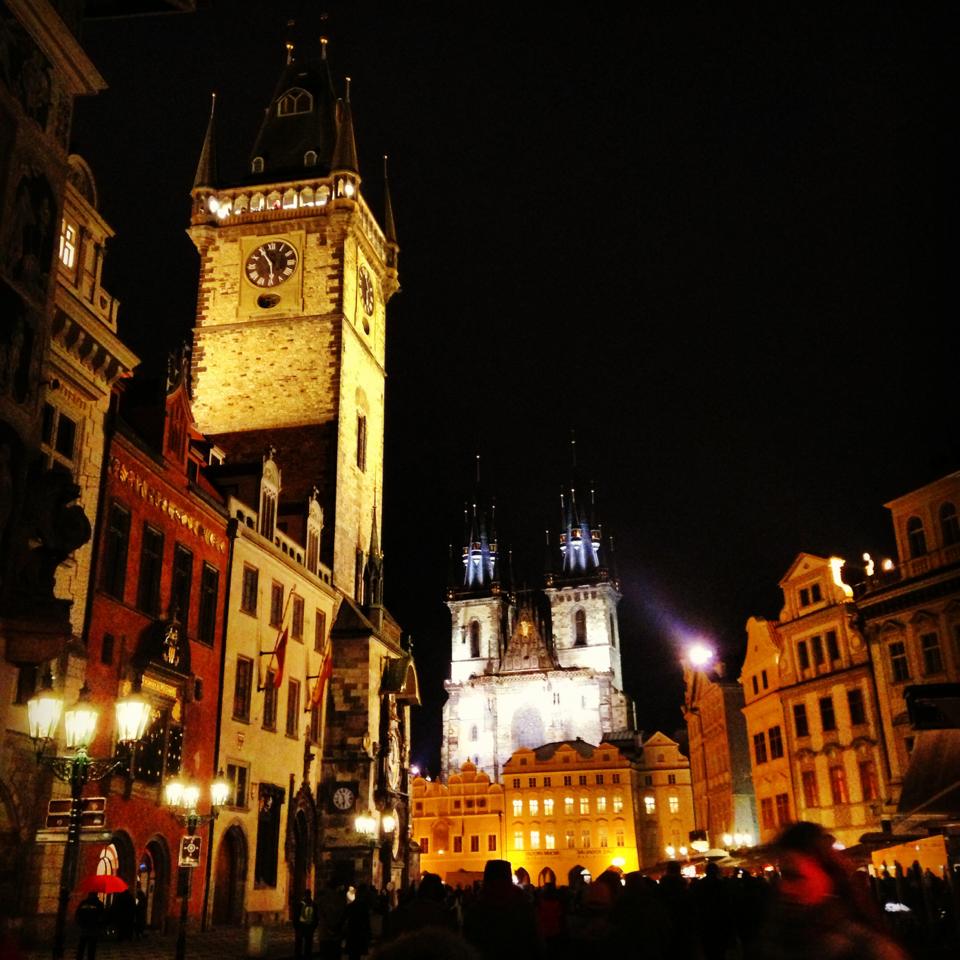 With its snow-capped spires, cobblestone alleys, and the cozy hue from its old-fashioned street lamps, Prague just screams winter fairytale. It is relatively tourist-free in the winter, which is surprising because the city’s natural beauty really comes to life under a blanket of snow. Stroll through the Prague Castle at your own pace or hit up a local cafe to escape the cold, especially Choco Cafe, which has more than a dozen types of hot chocolate.

If you want to party, make sure you check out our Where to Party in Prague guide, and to experience the local cuisine of the city, take a food tour with Eating Europe.

If you’re in the Czech Republic long enough, be sure to take a day trip to Cesky Krumlov, which is a tiny medieval town known as the “Pearl of Bohemia”. Easy to get to by train and well worth the trip, especially for fans of the movie Hostel, which was filmed here. Nothing like adding a little spook to your winter! 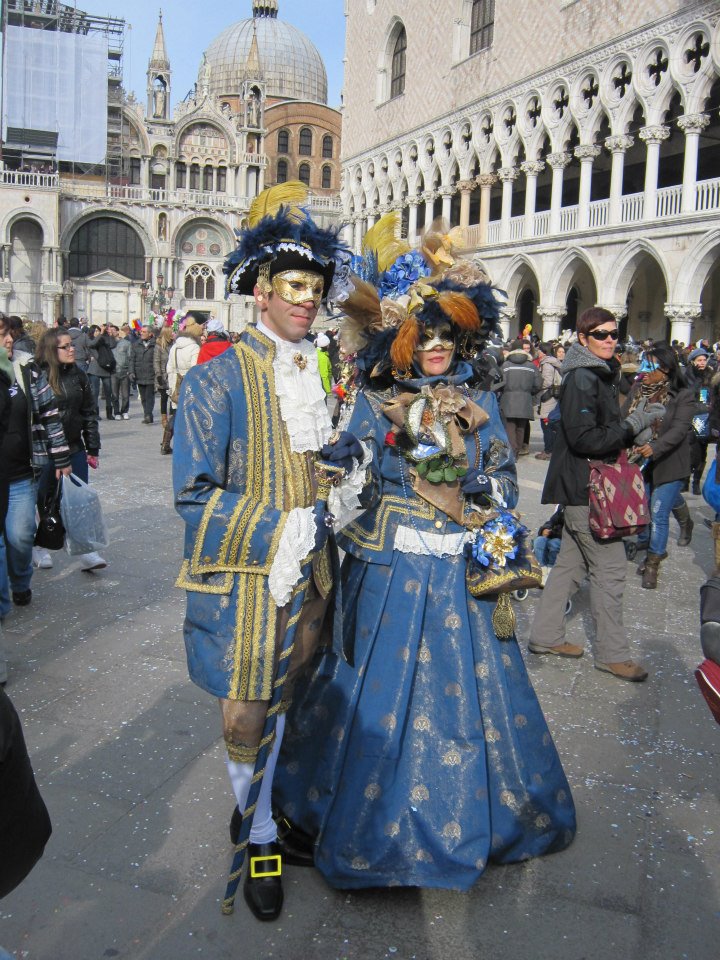 Hands down one of the top European tourist attractions in winter is the Carnival of Venice. Beautiful, exciting, and definitely a little bizarre, Venice’s February through March celebration is absolutely not to be missed. Be forewarned that costumed events can set you back a hefty penny, but those looking to save a few bucks can get the full effect of the festival by enjoying the many free events around the city – just with a mask purchased at a street market or local shop. Talk about an awesome souvenir!

Carnival aside, traveling to Venice in winter allows visitors to experience the city at a slower pace and really soak up the culture. The city’s canals, unique architecture, and old-fashioned atmosphere become magical in winter, and the lack of crowds don’t hurt, either. A stop in Venice during its colder months is a definite European highlight, as it’s one of the best European cities to visit during the winter.

BTW, Venice is notorious for being tough to find good food in. It’s definitely a city that I recommend doing a food tour in, have a look at The Tour Guy’s Venice food tour with gondola ride included. 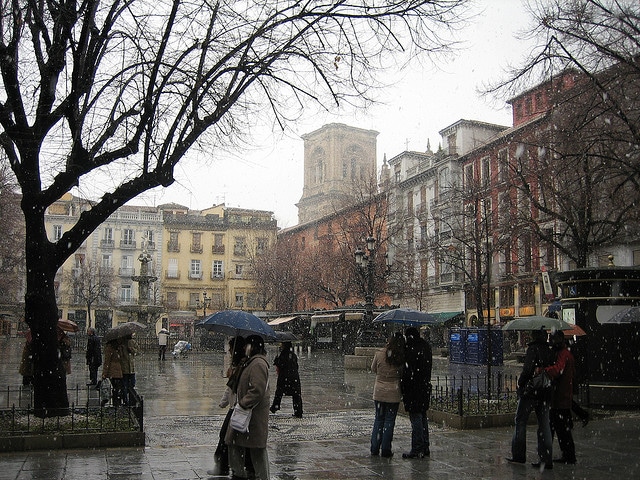 If you’re looking to take a break from the bitter cold, Granada is a great solution. However, don’t go Spain under the impression that it will be a beach vacation. Even southern Spain is too cold for the beach in the winter, which is why a city like Granada is such an ideal option because there is more to do than just stroll along the sand. No other region has as much variety as Granada — you can ski the Sierra Nevadas, head to the coast, or simply just roam the city. Spain is much cheaper and less crowded in the winter months, so visitors can truly enjoy the city’s sights without waiting in line or breaking the bank. 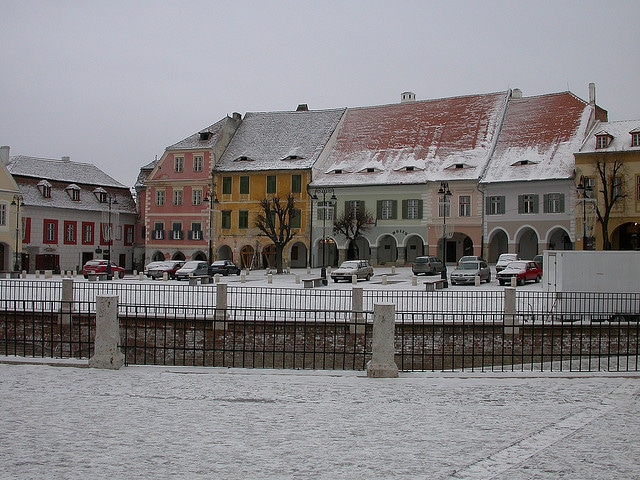 While tour groups line up every summer to visit Dracula’s fabled home, it just doesn’t feel right to visit such a place on a warm, sunny day surrounded by tourists with selfie sticks. So, take a visit to Transylvania when it’s cold and snowy instead to get the full effect! In addition to Dracula, the region of Transylvania is home to so many medieval towns filled with castles, cathedrals, and rich histories that we couldn’t pick just one to feature.

After you’ve frolicked to your heart’s content through winding villages and scenic overlooks, don’t forget to hit up one of the area’s many ski resorts and national parks for some real winter activities. 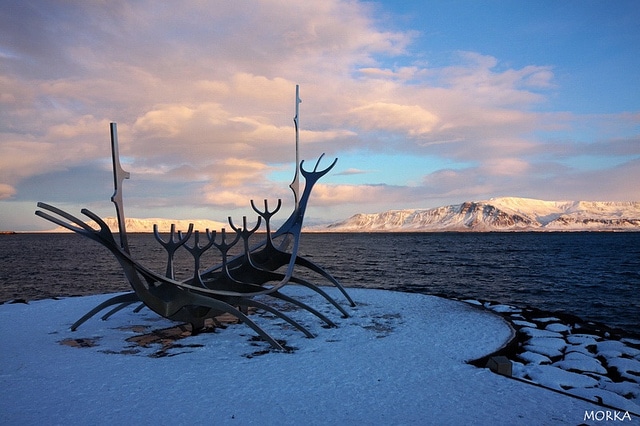 Even though Iceland is a trek from most popular study abroad spots and it is among Europe’s coldest areas, there are many reasons why its capital is a must-see place. The annual Winter Lights Festival in February is one of the best European celebrations of winter and its abundance of winter sports, museums, and restaurants make it quite a happening place, not the frozen and barren land that most people imagine.

What makes Reykjavik even more special are the city’s many outdoor geothermal swimming pools, which are some of just a few in Europe. There is nothing quite like relaxing in their naturally warm waters while the snow falls around you. Every pool is unique, so don’t be afraid to try as many as possible! 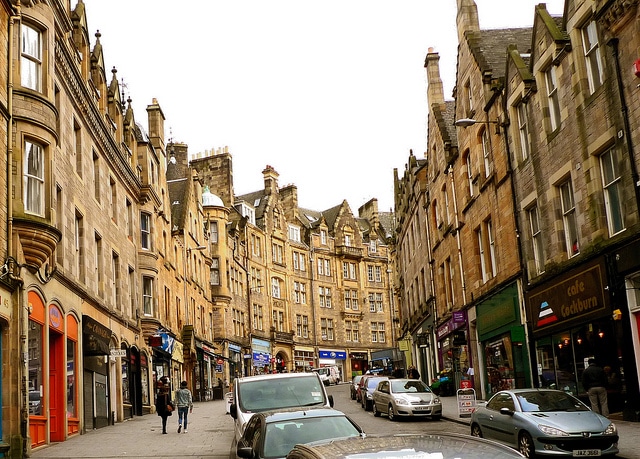 The winding streets, stunning castles and palaces, and beautiful Princes Street Gardens transformed into a winter wonderland make Edinburgh a city to definitely visit in winter. There is nothing more charming than ice skating in the center of one of Europe’s oldest cities and wandering through the Edinburgh castle as the snow slowly falls, if you’re lucky to see it. Be sure to check out the highlands as well, which are exquisite in winter.

Arthur’s Seat, on the edge of the city, is the perfect place to take a snowy stroll while soaking up unparalleled views. Just be sure to pack an extra coat – it can get windy at what feels like the edge of the UK! Regardless, Edinburgh is still one of the top European cities to visit during the winter. 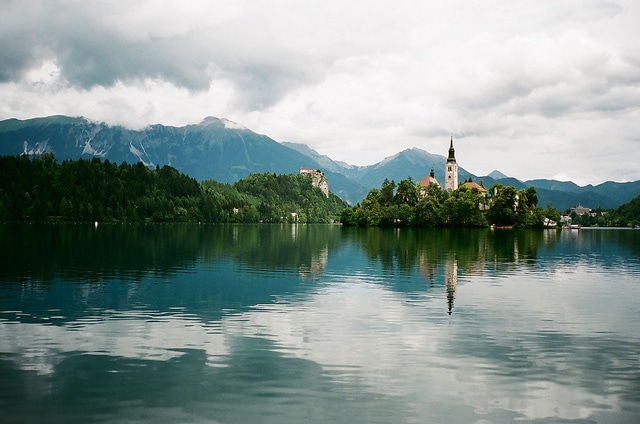 Bled’s incredible natural beauty combined with its peaceful surroundings make it one of the most superb alpine areas in Europe. Renowned for its healing climate, thermal lake water, and “tucked away” ambiance, this small city is perfect for anyone looking to have a relaxing winter escape. However, don’t shy away from Bled if you’re looking for a bit more adventure – its terrain is ideal for anyone interested in outdoor activities such as hiking, skiing, or ice skating. In between relaxing and skiing, don’t forget to check out Bled Castle, a medieval fortress believed to be the oldest castle in Slovenia.

Whether you’re into shredding the slopes or strolling the quaint cobblestone streets, Europe has plenty to offer in the winter. Don’t get bogged down by the cold weather or cabin fever – just pop some cold-weather travel gear on and try something you otherwise couldn’t do in your own city.

More tips for Winter in Europe:

6 Fun Activities to Do in Europe During the Winter 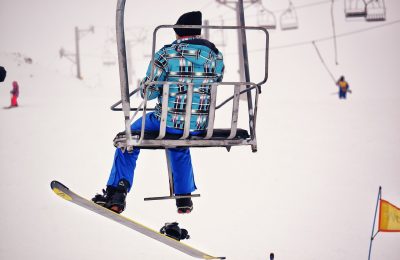 32 thoughts on “10 European Cities to Visit During the Winter”