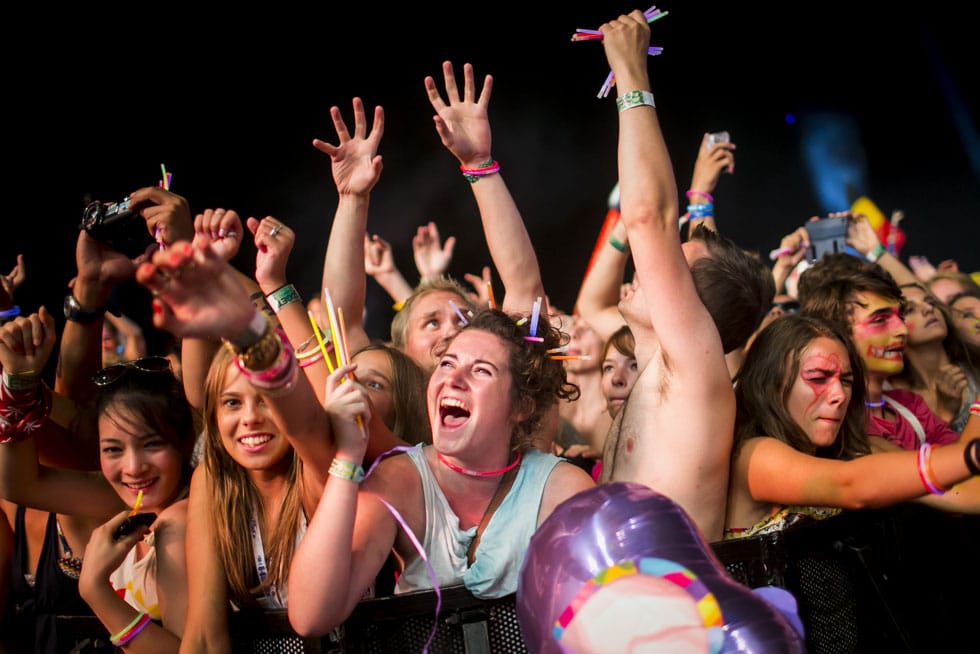 10 Crazy Festivals in Europe That You Can’t Miss

If you’re visiting Europe soon, you could do as many visitors do and opt for the city-hopping route, where you visit a new city every weekend and absorb as many local delicacies and delights as possible. Or, if you want culture and fun on steroids, with the locals all very merrily celebrating life with you in one place, you may opt to go for a crazy European festival. To me, nothing says cultural experience like getting a tomato to the head, having a two-ton bull chasing you down, or a geriatric spray red wine in your face with a hose from her truck and cackle as if she’d never had more fun… do you agree?

Based on much personal experience, here are the top 10 European-not-to-be-missed-you’ll-have-the-time-of-your-life-and-you’ll-regret-it-forever-if-you-don’t-go festivals. 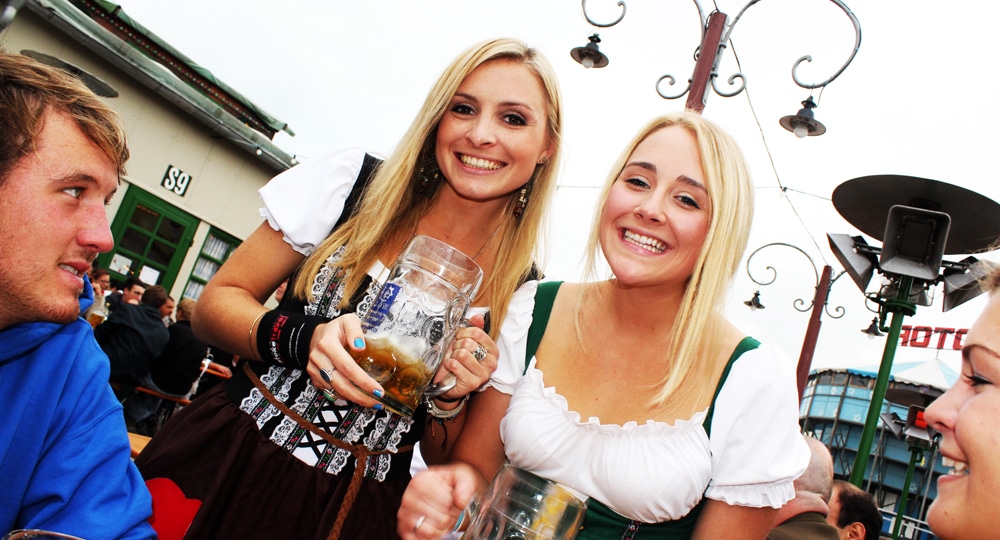 Oh the glorious gaeity of Oktoberfest. Blonde bavarian beer wenches and gorgeous, golden beer. Lovely blue-eyed beefy German lads dressed in traditional Lederhausen and standing on benches singing merrily to the oompah-loompah bands. This has to trump them all. All you have to do is find a piece of real estate on a bench full of locals and you’ll be served a litre of strong beer in a stein glass. This will set the tone and after two, you’ll be well into party mode and singing along to German folk songs you don’t understand. When you’ve had your fill of the beer halls, you can head out into the carnival area and go on rides or eat lovely Bavarian treats. There is nothing bad to say about Oktoberfest. Beer, food, rides, music, laughing, local. It’s just lovely. 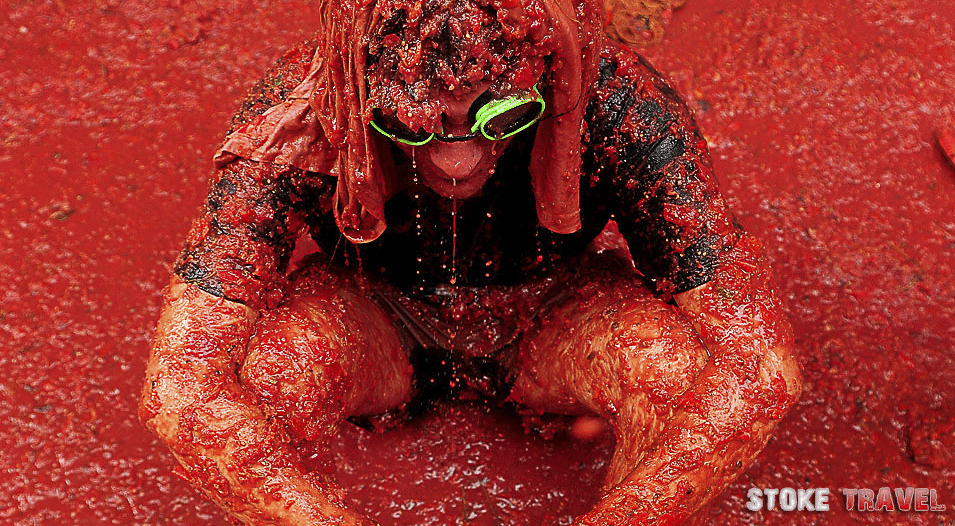 Only in Spain would an entire festival be dedicated to throwing squishy tomatoes at one another. This is no ordinary food fight though. On the last Wednesday of August, thousands descend upon the tiny town of Bunol to have a massive food fight. About 7 truckloads of tomatoes are distributed through the crowd – distributed meaning pelted at the surging masses. Be warned: this festival is not for the faint of heart. Wear goggles and don’t go into the thick of it unless you don’t mind big crowds. If crowds don’t bother you, get right in there and let out your inner warrior. 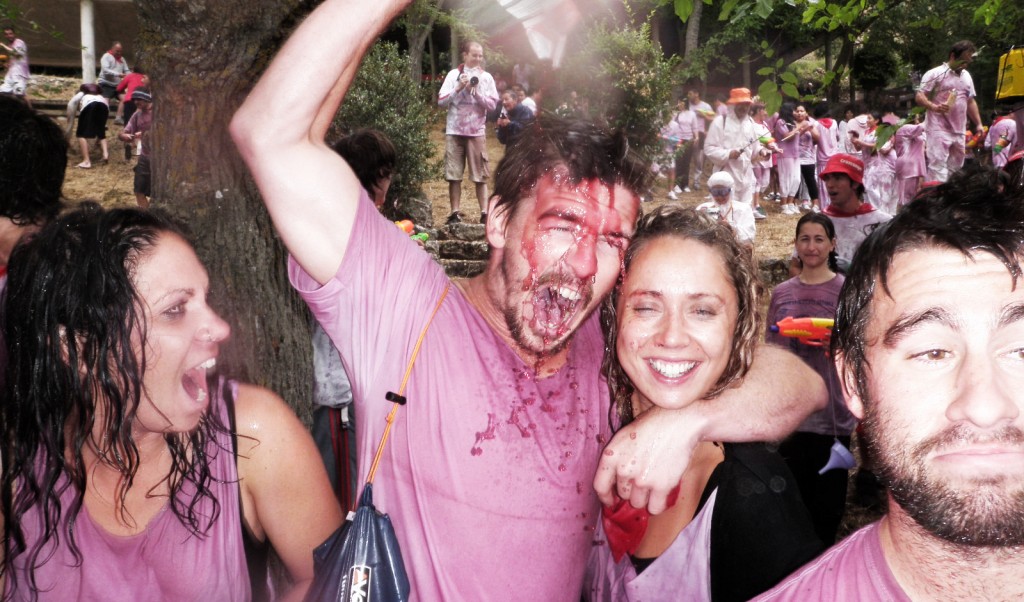 Batalla de Vino is another Spanish festival that cannot be missed. This time the weapon of choice is red, red wine. On a chilly late-June morn, the people of the small town of Haro all trudge up the hill to the allocated spot armed with water-pistols, buckets, high-pressure hoses, and truckloads of the local ambrosia to douse one another with. As the sun rises, the world turns purple and so do you. Insider’s tip: If you’ve had enough of the fight, you can head up the hill to the little chapel and watch the sunrise from there. It’s exquisite. 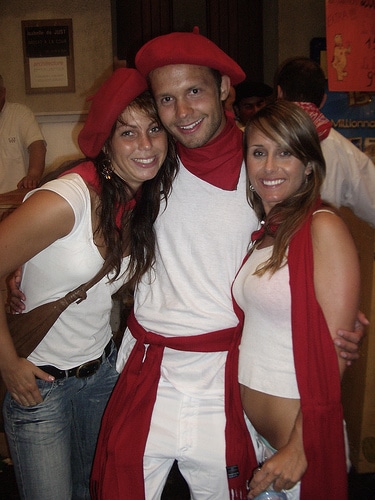 This is the classic European street party, done with a French-Basque twist. Everyone dresses up in whites with a red sash and red beret and hits the streets to sate themselves on local wine and cheeses and delicacies. Tres chic. The best part about Fetes de Bayonne is it’s in Basque country, which means the food is incredible, the people are super welcoming and the sangria is free flowing. There’ll be fireworks, there’ll be dancing and you’ll probably make out with a hot Frenchie. Pour quoi no? 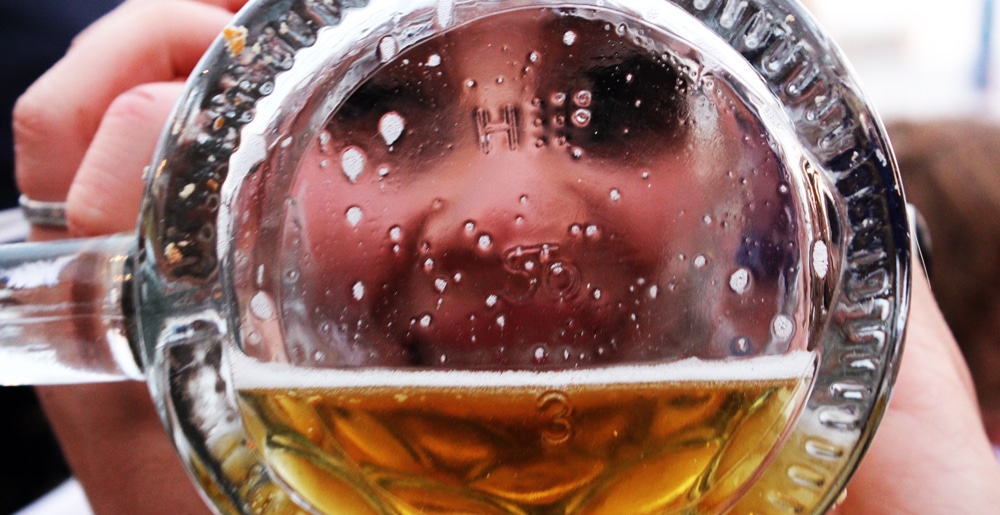 This is a lesser known one but if you’re not around for Oktoberfest, Springfest is a smaller, more local version of its big sister. With the same flowing beer and the same jovial singing on tables, this one also has a market during the day and a much more relaxed and springy feel. Springfest happens in April when the winter chill is just letting go of Munich and everyone is in very high spirits. 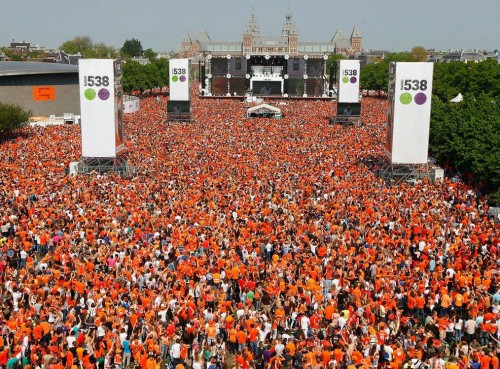 The Dutch work hard, but they play harder and on this day, their national spirit is ignited. Amsterdam turns orange on Kingsday and every Dutchie that can heads to the canals to party on the water’s edge and celebrate their king’s birthday. It’s unknown whether they really care about his birthday or they just like the excuse to miss work and let their hair loose, but to us, it’s irrelevant. You can drink Amstel lager on the Amstel river as every boat in the city turns into a booze cruise for the day. If you want to heighten the experience, you’re sure to find a coffee shop a stone’s throw away – weed recommend this is you get my drift.

If you’re into anything artsy, Sziget is for you. There’s live music with some top international artists, there are art exhibits and dance performances from tap to interpretive, there are creative areas where you can let your inner Yoko Ono out. For accommodation you can either camp or stay at one of the awesome party hostels in town. This festival happens on the little island in the centre of Budapest so it’s easy to get to and is a creative multicultural fusion on fun.

8. Running of the Bulls

This controversial festival happens every year in Pamplona. For a week in July, the masses descend upon the town for the festivities including street parties, fireworks displays and the notorious bull runs. The run is as dangerous or safe as you want it to be depending on whether you’re gonna throw yourself in front of the bulls or trot along the side. Of course even along the side you’re not entirely safe, but that’s what give you the adrenaline rush. Unfortunately they do kill bulls every afternoon in gruesome bull fights, so if you’re an animal lover, avoid this one. 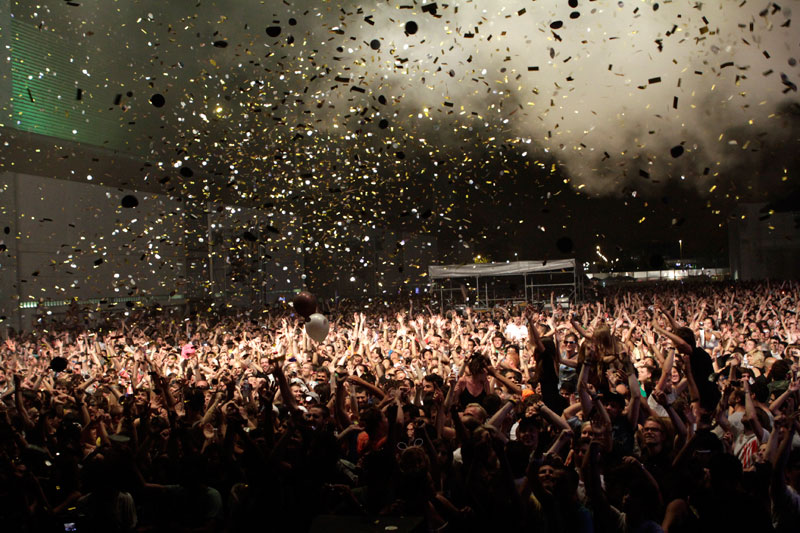 Calling all house lovers – this is the strobe-lit, DJ-dowsed, chemically-enhance festival for you. Barcelona turns into one big house party with Sonar and off-Sonar gigs all over the city. You can get the official tickets and see some of the biggest names in the DJ’ing world, or you can go to less expensive or free off-Sonars that are arguably better. Just depends on your budget. Be sure to stock up on bright clothes and crazy sunnies. 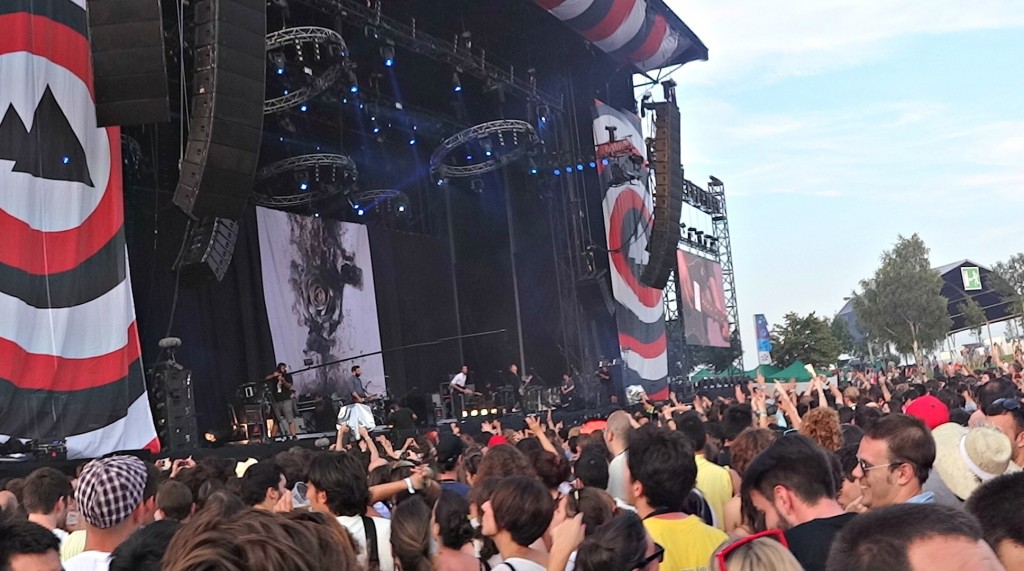 Based in Bilbao, BBK Live! is your ultimate live music festival. Big names this year like Muse, Mumford & Sons, Cat Empire, Ben Harper & Counting Crows will be playing. The festival is a 3-day tribute to quality tunes. Bilbao is a comfortable distance from both Pamplona and San Seb, so if you want to combine some things while you’re in this part of the world, you could run from the bulls, jam at the BBK and then head to San Seb for surf and some of the best food you’ll ever taste. Why this part of the world is just so good at life I don’t know, but I’m grateful for their efforts that we can enjoy.

So there you have it. Some ideas for some awesome experiences that you’ll never forget. Unless you overindulge in sangria. In which case you’ll have hazy memories, but they’ll for sure be good ones.

Lisa Parsons works in the travel industry because she likes compartmentalized airplane food and drinking wine in exotic locations. She has roamed far and wide from South America to North America to Europe and Africa. Hailing from South Africa, she studied languages and journalism and is a freelance writer and part-time actress in her spare time. Look out for her at the Oscars in 6 years' time.