How to Make Friends With the Locals While Studying Abroad

One of the best and most rewarding things you can do while studying abroad is to make friends with the locals in your city.

Why you should make friends with locals while studying abroad:

•  You’ll find out about hangouts and spots around the city that tourists and other students don’t know about.
•  Your local friends can help you with practicing the language, and you can learn popular slang terms that they won’t teach you in class.
•  Even if these new friends aren’t originally from your study abroad city, you’ll then have friends that you can visit all over the world.

You’ll probably become extremely close to your roommates and other students in your program, which is great. But you’ll find that breaking out of the “program bubble” will be crucial if you want to make some local friends. Making friends with locals and non-Americans will show you a whole different side to your study abroad experience.

Here are my tips for how to make friends with the locals while you’re studying abroad.

Don’t be an obnoxious American

Us Americans have a nasty habit of being super loud when we’re with a group of people. It’s ok to laugh, talk, and have a good time, but make sure you’re doing it on a discreet and polite level, especially if you’re indoors– this ain’t happy hour at Applebee’s, people. Laughing at the top of your lungs and talking loudly just screams “tourist” to everyone around you, and most locals don’t like to associate with that, as it’s not what they’re used to.

Read next: How to Start a Travel Blog for your Study Abroad Semester 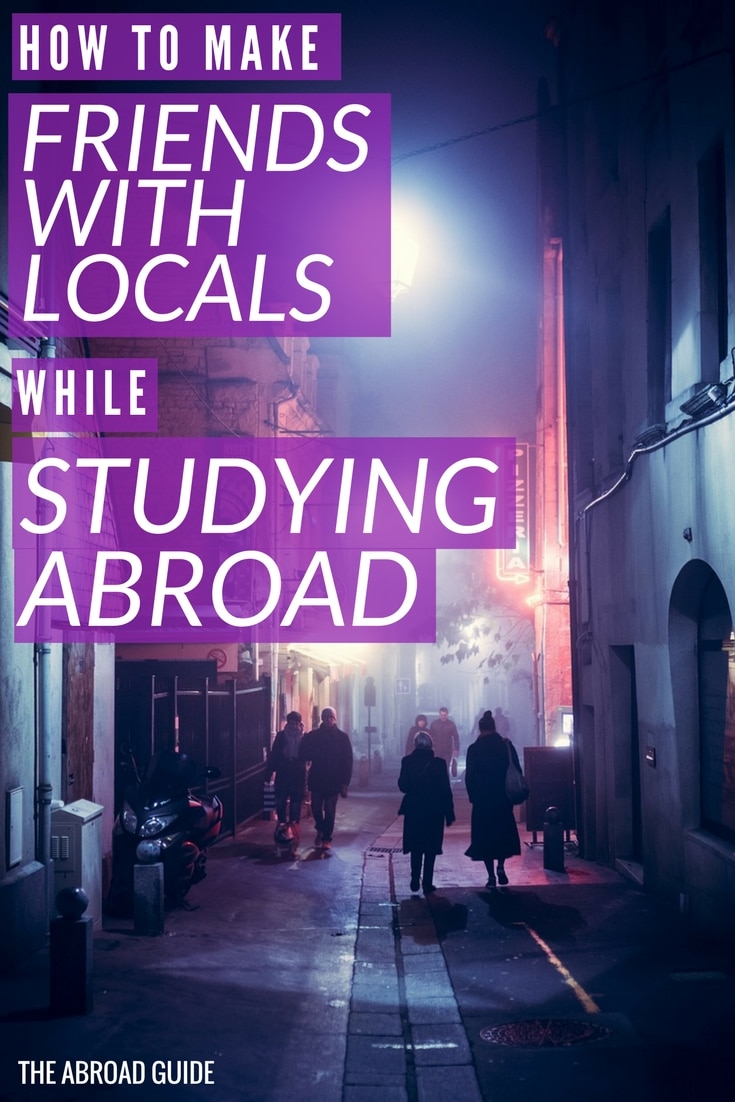 If possible, see if you can take classes with other international students instead of classes that only American students can take. Being in class with the same people two or three times a week will give you the chance to make at least one friend with a fellow international student. If the course will require participation in group projects, that’s even better! It gives you an excuse to host an “international study party”, and each member can bring a traditional drink or snack from their home city or country .

Even if you can’t change your academic course load, sign up for a class on your own– maybe a casual, once-a-week language course, if you aren’t already taking one. You’ll not only work on those language skills but can also meet a boatload of other people with the same goal as you. They may not be locals but it’s an easy way to meet a group of people outside of your American study abroad friends.

Also, to meet the “true” locals, consider taking a cooking class or another type of one-off course where you know that people who live in the city will actually go to. You’ll really be testing your language skills but your classmates will probably give you a ton of credit just for trying.

If you’re studying in a city that gets tons of tourist, you’ll notice it’s fairly easy to pick out the American ones– they often are wearing baggy sweatshirts, running shoes (even when they’re not exercising), ugly T-shirts with writing, or bright colored flip flops. It may be the style that we’re used to, but the rest of the world thinks we look like messy slobs. Do a little research to see what the locals do and don’t wear, and follow along. It will help you blend in and look like a local yourself!

Read next: How to Fit in with the Locals in London

Stay away from anywhere that serves Budweiser

Cities that are popular study abroad destinations for American students always have certain bars and clubs that those students flock to. It’s totally fine to go to those spots– it’s fun to meet other study abroad students from all over the US and you can make some really great new friends that way. But to get into the local scene, make an effort to party elsewhere as much as you can. Ask around to find some good local spots, or take a chance and just go someplace that you’ve never been to before but always see a crowd of locals at. Don’t forget to order your drinks in the native language!

Do as the locals do! If people around town typically grab drinks after work or class, try the same. If there’s a city celebration, join in on the fun. That’s part of the fun of studying in a foreign country, and trying these new things will help you branch out and meet some new friends who are immersing themselves in the city’s culture as well. In addition, they can probably teach you loads about the culture that’s not in the guidebooks.

Don’t be afraid to do things by yourself

If your friends in your program aren’t interested in branching out from their tight-nit group, that’s ok. Spend time with them as much as you’d like, but don’t be afraid to venture out on your own. If you’ve heard of a local cafe that you want to try out but none of your friends are interested, take a book and enjoy the time by yourself as you’re immersing yourself. While you’re there, you’ll probably encounter some other people who often do the same thing.

On top of that, being alone actually makes you more approachable than if you were chatting away with a group of friends, so you’re more likely to get a friendly greeting from a local.

Read next: 8 Reasons to Travel Solo While Studying Abroad

Most important of all– don’t be shy!

None of these tips will help you make local friends if you don’t make the effort to actually speak to any of the locals you encounter. It may be a little scary to strike up a conversation with a stranger at first, especially in a foreign language, but after you’ve had one “successful” interaction, you’ll see how easy it really is.

Be sure to know the appropriate greeting for the city you’re studying in, and don’t be turned off by initial coldness– some cultures don’t approve of lengthy conversation with a stranger, so just know how to approach it.

Do you think it’s important to make non-American friends when you’re studying abroad? How do you plan on making local friends while you’re traveling? Let us know in the comments!

TAGStudy Abroad Tips
Previous PostShould You Get a Master's Degree Abroad? Next PostHow to Avoid Gaining the "Study Abroad 15"